REQUEST A 16" × 20" POSTER
AND PAY ONLY 1¢ EACH PLUS
THE COST OF SHIPPING*
Select a quantity and click ORDER
* Pay only $5.00 to cover shipping and handling for up to five posters. Please contact us to inquire about requests for more than five posters.
UNDERSTANDING THE SYMBOLISM IN THE KNOW YOUR NEIGHBOR POSTER 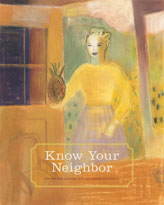 In the Know Your Neighbor painting, artist Vivienne Flesher's choice of colors sets the mood, with brown evoking a natural, down-to-earth feel, and green, abundant in nature, symbolizing life and renewal. Yellow is sunshine while gold suggests the emotional riches that can come from family and friends.

The woman who is of no apparent ethnicity is coming in the back door, implying familiarity with her neighbor. She is carrying a pineapple, a fruit laden with symbolism. Hoag Levins in The Social History of the Pineapple explains that the pineapple was originally unique to the Western Hemisphere.

"The first encounter between a European and a pineapple occurred in November 1493 when Christopher Columbus, on his second voyage to the Caribbean lowered anchor in a cove off the lush, volcanic island of the Guadeloupe. The Renaissance Europe to which Columbus returned was bereft of common sweets.

Into the 1600s, the pineapple remained so uncommon and coveted that King Charles II of England posed for an official portrait in an act then symbolic of royal privilege — receiving a pineapple as a gift.

Across the ocean, the pineapple took on other symbolic meaning in England's American colonies. The colonies were then a land of small, primitive towns where homes served as the hubs of most community activity. Visiting was the primary means of entertainment. The concept of hospitality—the warmth, charm and style with which guests were taken into the home—was a central element of the society's daily life.

While fruits in general were the major attractions of the community's appetites, the pineapple was a true celebrity. Its rarity, expense, and reputation made it the ultimate exotic fruit. Thus visitors confronted with pineapple-topped food displays felt particularly honored by a hostess who obviously spared no expense to ensure her guests' dining pleasure.

As the visual keystone of the feast, the pineapple naturally came to symbolize the high spirits of the social events themselves. The image of the pineapple came to express the sense of welcome, good cheer, human warmth and family affection inherent to such gracious home gatherings."